At the morning weigh in I'd lost another pound. And even more exciting my BMI was down to 30 exactly. This means that if I lose any more weight I will officially be overweight instead of obese.

I felt pretty good this morning.  After walking on the treadmill my legs didn't feel leaden and I had no difficulty walking up two flights of stairs.  I really think that things have finally changed for the better.

The three week diet is comprised of 3 different phases.  Today was the first day of the high fat phase.  As I was now officially allowed coffee – albeit with cream and artificial sweetener, I made a cup of instant coffee with cream. It tasted really really disgusting, so I disposed of it and made a normal one with milk.

I held out until lunchtime to have my first meal. It wasn't that hard, I didn't feel particularly hungry and when I finally ate my guacamole it was really delicious and quite satisfying despite not having chips or crudités to eat it with.  It was lovely to finally have some really tasty food!

However later on in the afternoon about 4 o'clock I began to feel just slightly queasy.  The feeling persisted and at dinner time my partner volunteered that he felt the same.  We were't sure what had caused it, so in view of the fact we had to go out and meet friends later, we decided to abandon the planned high fat meal and go for something rather more plain and ordinary before we went out.

Perhaps it was the abrupt change in diet which had caused our problem?

At the morning weighing I was exactly the same as the day before. I don't know if yesterday's sweet potato dinner had sabotaged the day’s dieting effort but I would have expected to be down a touch as I hadn't eaten very many calories at all.

We had discussed the fat phase yesterday evening and decided that in view of the sweet potato, we may continue the fat phases for an extra day. But we were going to have to include a few more (zero carb) vegetables in order to make the fat less stomach turning.

The main thing I noticed this morning was that I felt hungry. I assuaged the hunger pangs with a cup of coffee and then breaking the routine of walking before breakfast, I had a microwaved mushroom with some garlic and herb cream cheese for breakfast. It was delicious.

My body is feeling altogether better. I'm not really sure what's different but I do feel lighter, but I have lost half a stone.

Dinner was a beautiful dry aged rib eye beef steak. I fried steak with a little oil to start with and then I added butter to the pan, and basted of the steak with the butter. While the steak was resting I added a finely chopped shallot to the pan allowed that to soften before adding a touch of brandy. I love a good flambé so I set the pan on fire to burn off the alcohol. I added some chicken stock, some mushrooms, and a spoonful of Dijon mustard and a few drops of Worcestershire source. After that had bubbled away for a moment or two until the mushrooms were cooked, I added a add a splash of cream and reduced until it is was the consistency of single cream.  I adjust the flavour at the end with salt, pepper and lemon juice.

It was the most delicious tasty meal I had enjoyed since starting the diet. I didn't stint on the vegetables, so my plate wes full. It was the first time I had gone to bed without feeling hungry since the start of the diet.

The weigh in this morning was quite disappointing. I had hoped that I would have lost lots of weight after yesterday's not having lost any. But if anything the scale said that I was half a pound heavier. It could be the difference in the amount of water as I did try and drink more water yesterday.

Lunch was paté on a lettuce leaf. As we couldn't have crackers, lettuce leaf seemed the only real viable solution. I have since found a recipe for sunflower crackers which is low carb which I may try and make to see how they work instead of cracker biscuits.

I must have eaten too much pate as I did feel slightly nauseous later on.  I think there’s an art to eating high fat foods, and it involves eating enough “other stuff” at the same time.  The key thing is to find other stuff to eat which is filling and can cut the richness without throwing the nutritional profile outside the approved parameters.

If you want to try the 3 week diet yourself here is the sales page, or to read the expert review click here

Slightly disappointed with the progress during this phase of the diet.

< Back to the Previous Days | Forward to Next Post >

It's always motivating when I stand on the scales and see another pound less on the dial. And I think that's what keeps me going despite the fact that my body feels like it's been drained of all energy.

This diet is pretty exhausting.  Arranging to eat the correct food isn't too difficult, and interestingly I don't even feel like snacking, however my body feels tired.  I managed a mile on the treadmill this morning and once I got into a rhythm it was fine, but later on, by the time I'd walked up two flights of stairs I was desperate to sit down for a rest.

Today was also the day when we had to sit down and do the menu plan for the next phase of the diet.

Producing a menu plan turned out to be a little more difficult than I had anticipated. I settled on a plan which I guessed would give me the correct proportion of fat in our diet for the next phase.  However then I re-read the instructions to discover that for me, there was a maximum of 1200 calories per day.

Once I'd checked the internet to discover that 1 medium avocado = 250 calories I realized that there was pretty much no chance that the of the menu I had arranged coming in at that low value. High-fat food is also highly calorific as each gram of fat provides 9 cal, whereas each gram of carbohydrate and protein is only 4 cal. So if you're counting calories as well as upping the fat content it's a bit of a delicate balance.

Bodywise, today was even grimmer than yesterday.  I'm not taking to this detox diet thing well, I don't feel lighter and cleaner yet, perhaps my body has lots of toxins to get rid of!  I'm not cheating much, apart from the odd cup of coffee when everything gets a bit much.

In the afternoon I really did feel awful and I wondered if it was lack of carbohydrates, so I made the executive decision to have a very small portion of quinoa with my dinner – it was the least processed carb I could think of and thus hopefully would at least be a slow release unlike say sugar or fruit. 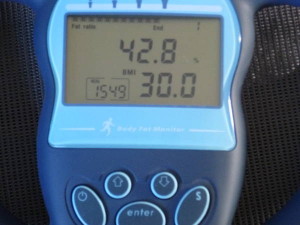 I had wondered if it was as a result of adding carbs last night, but when I compared notes with my friend who I had persuaded to do this along with me, she also said that today she also felt like a new woman!

I was quite relieved.  All this effort and I'd finished first week 7.5 pounds lighter and now I was actually feeling really good.

One of the options for today was to fast for the day. I was pretty unsure about doing this because I'd felt so ill yesterday, but today it was a different story.  I managed to book a haircut over lunchtime which I thought would probably distract from any hunger pangs.

As I got ready to go out I noticed that I could do up my shoelaces without having to undo my belt.  A result! And then a good chat with the hairdresser and I forgot all about feeling hungry.

By the time I ate dinner I wasn't too hungry and despite having cooked lots because I hadn't eaten all day, I couldn't eat is all.

I was feeling much better about the whole diet. And looking forward to the next phase which starts in the morning.

If you want to follow the diet with me, you can try it here or to you could find out more from Kate's 3 week diet review

Still happy with the drop in body fat percentage!

< Back to the Previous Days | Forward to Next Post >