How to lose weight with PCOS

One in every 10 women worldwide suffers from PCOS.  Polycystic Ovary Syndrome is not only the leading cause of fertility problems, but this hormonal condition can also makes losing weight extremely difficult.

What Are The Symptoms of PCOS? 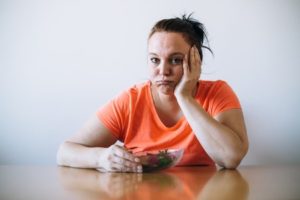 If you're in the 10% of women who suffer from PCOS, it can be very hard to lose weight.

If you are struggling with your weight and wondering if PCOS is contributing to your problems, some of the more noticeable symptoms of PCOS include weight gain and difficulty in losing weight, irregular periods, acne and excess body hair.  Your doctor will be able to do the relevant tests and give a definitive PCOS diagnosis.

The reason that PCOS and weight problems are inextricably linked is all to do with your body’s reaction to the insulin hormone. Women with polycystic ovary syndrome also have insulin resistance.  A bit like the chicken and the egg, experts are divided as to whether Insulin resistance causes PCOS or PCOS causes insulin resistance, but the two problems go together.

Insulin helps to process the carbohydrates you’ve eaten. Insulin helps the body move sugar out of the bloodstream into the muscles and organs where its needed for fuel.

However, when a person is suffering from insulin resistance, this function doesn’t work efficiently. Blood sugar levels rise, the body makes more insulin to compensate and this higher level of insulin in the bloodstream causes unwanted side effects.

Higher levels of insulin cause the ovaries to produce hormones called androgens. These are generally thought of as “male” hormones because they can cause body hair growth, acne, menstrual and fertility problems and weight gain.

Generally, men put on weight around the stomach.  As PCOS related weight gain is caused by male hormones, it also tends to layer fat around the belly giving sufferers more of an apple shape than the classic female pear shape.

So, is it worth trying to lose weight?

I’d have to answer this question with a very emphatic Yes.  The PCOS weight gain increases the risks of a number of health problems including type 2 diabetes, heart disease, some cancers (most notably breast and colon), osteoporosis and high blood pressure. Losing weight by even 5% can lead to a significant improvement in the severity of PCOS symptoms as well as significantly reducing the risks of these longer term health problems.

Losing weight with PCOS is hard.  How do we do it?

Losing weight is never easy, but the best way to lose weight – even with PCOS – is to use the natural remedies of diet and exercise.

In this case specifically, understanding the cause of the weight gain makes it easier to choose the right diet and exercise plan for successful weight loss.

The key point here is that PCOS women are suffering from insulin resistance, So the steps we need to take are all designed to improve our insulin sensitivity.  The good news is that scientists have proven that by exercising and losing weight, insulin resistance – and it's friend leptin resistance can be improved and even reversed.

What kind of exercise is best?

The insulin-sensitizing effect of an exercise session lasts from 48 to 72 hours (2 to 3 days).

This means that if we follow an exercise program, it needs to contain workouts probably every other day for best results.  However, the insulin sensitizing effect can be gained from both aerobic or resistance training so you can choose the exercise that suits you best – and indeed vary the exercise so you don’t get bored.

There is, however, an easier way for those of us who are not keen on following a formal exercise program.

A recent study published in the International Journal of Behavioural Nutrition and Physical Activity holds the key.  It showed that positive effects on insulin sensitivity can be achieved by increasing the total amount of daily activity – rather than working out for a set number of minutes.

This boost was shown without any corresponding increase in aerobic fitness. However, regular activity also has a training effect on the body. It often causes a change in body composition – a reduction in fat and an increase in muscle. Having more muscle helps regulate blood sugar naturally without the body having to produce any more insulin – another boost for our insulin sensitizing plan.

What is the best PCOS diet?

Insulin resistance is also described as carbohydrate intolerance.  If you were intolerant to tomatoes for example, you would try, as far as possible, not to eat meals which include tomatoes.  And it's the same with carbohydrates.  The sensible thing to do is to eat as little as of them as possible. This means cutting down (or out) all forms of sugar, rice, pasta, grains and potatoes.

You may have been head to believe that this isn't healthy, but in fact, our bodies do not need to eat any carbohydrates at all to maintain our good health.

There are certain foods which we do need to consume because our bodies cannot make them. Essential fatty acids and some amino acids which we get from fat and protein are two examples. However, there is absolutely nothing which our bodies need from carbohydrates which they cannot get from eating fat or protein.

This excellent TEDx talk from obesity clinic director Sarah Hallberg M.D. explains the extent of the insulin resistance problems in the USA and describes her clinic’s (exercise free) cure.

The best diet for PCOS involves cutting down the amount of carbohydrates you eat as much as possible. This will lower the amount of sugar in the bloodstream and help to resensitize your cells to respond to the correct level of insulin in your body.

So what do you eat instead of carbohydrates?  The answer is fat.  Fat tastes good; it is satisfying so you won’t feel hungry, and it has virtually no impact on your blood sugar levels.

If you want a more detailed PCOS diet plan, the first 3 phases of the 3 week diet follow Sarah Hallberg's recommendations.

Professor Roy Taylor of Newcastle University in the UK is another expert in obesity and diabetes. He has demonstrated that type 2 diabetes can be cured by diet alone.  His diet involves eating a mere 600 calories per day, and his patients have had extraordinary success in reversing the insulin problems associated with diabetes.  He does, however, recommend that such an extreme diet is medically supervised. If however you are unlucky enough to have diabetes, it’s certainly worth discussing with your physician.

If you start to reverse the insulin resistance associated with polycystic ovaries, you can significantly reduce the unpleasant symptoms of PCOS as well as significantly reducing the risks of heart disease, diabetes, some cancers and a host of other chronic conditions.

The side effects of exercising and reducing your carbohydrate intake are all good. You will feel better, more energetic and as a side benefit, you could also save yourself money, as medication for all these conditions is expensive!