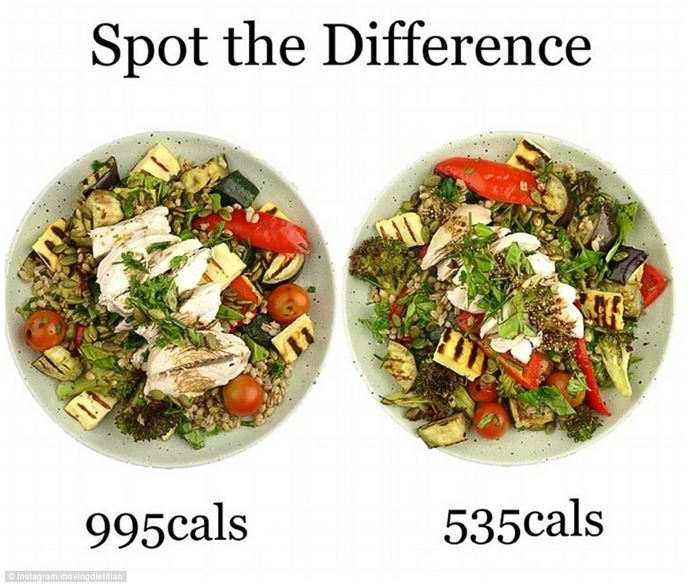 One of the hidden causes of obesity may be that people underestimate the number of calories they consume.

The UK's Office of National Statistics have just released new research which shows that Britons underestimate the amount of calories they eat by up to 50%.

According to the research:

And they noted that the more food people ate, the more they underestimated how many calories they'd eaten.

From my own experience of doing the 3 week diet, I know just how difficult it is to estimate calorie intake. In phase 3 which is a calorie restricted few days, I guessed how many calories I was eating. However, when I actually worked out the calorie count afterwards, I discovered that I'd underestimated by about 400 calories per day. Easily enough to sabotage my weight loss.

It's not just me who's notices how difficult it is to guess the calories.  Australian dietitian Paula Norris has revealed how a seemingly insignificant increase in portion size can make a huge difference to the calorie count of almost identical looking meals.

She has posted photos of almost identical meals on Instagram and points out how tiny tweaks to the meal  can boost the calorie count enormously. 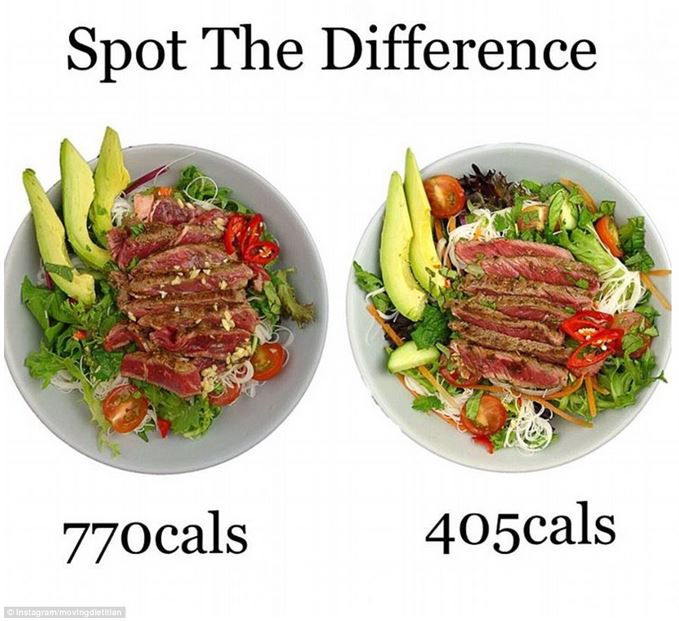 These photos show two plates of steak with rice noodles and a salad of lettuce, cherry tomatoes, avocado and red onion with a soy, lime and sesame oil dressing. They look almost identical.

The right bowl contains: 100g steak which has had the fat trimmed off and has been grilled instead of fried. It has the same amount of lettuce, red onion and lime juice. Hoever, there's half the avocado and rice noodles, 50g Cucumber, double the cherry Tomatoes, 1/2 a medium carrot and half the sesame oil

So the meal on the left has almost double the calories due to the extra slice of avocado, the extra teaspoon of sesame oil, and the bigger untrimmed steak that's been fried in oil and the additional rice noodles which on the right have been replaced with extra vegetables.

What's also slightly concerning is how adding a couple of supposedly “healthy” extra ingredients can double the calorie count of the meal.

Amanda Meixner a food blogger from Ohio was inspired by Paula and has continued the theme, posting a series of images showing the calorie difference between two seemingly identical plates of food. 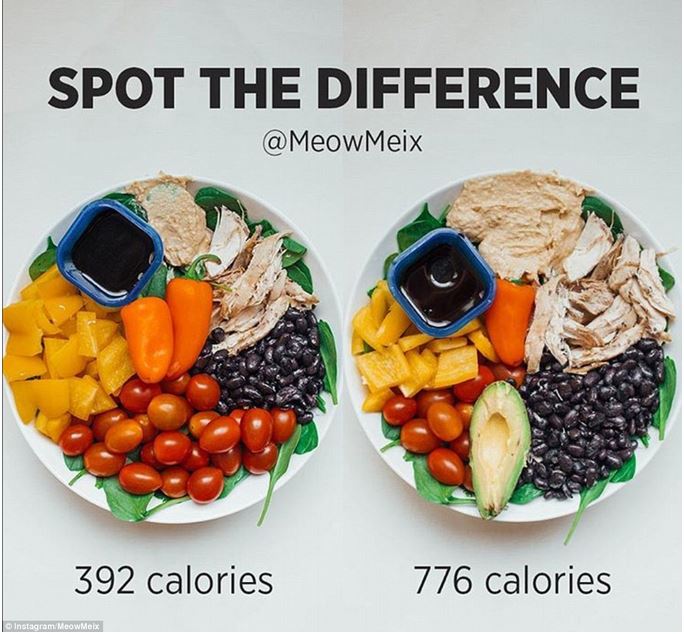 The salad on the left has a greater proportion of vegetables to black beans.  The plate on the right has close to double the  calories due to triple the hummus, a little extra chicken, an extra tablespoon of olive oil in the dressing and and substitution of a pepper for 1/4 of a very healthy but calorific avocado.

If you fancy a snack, the bowl on the left would be the one to choose… 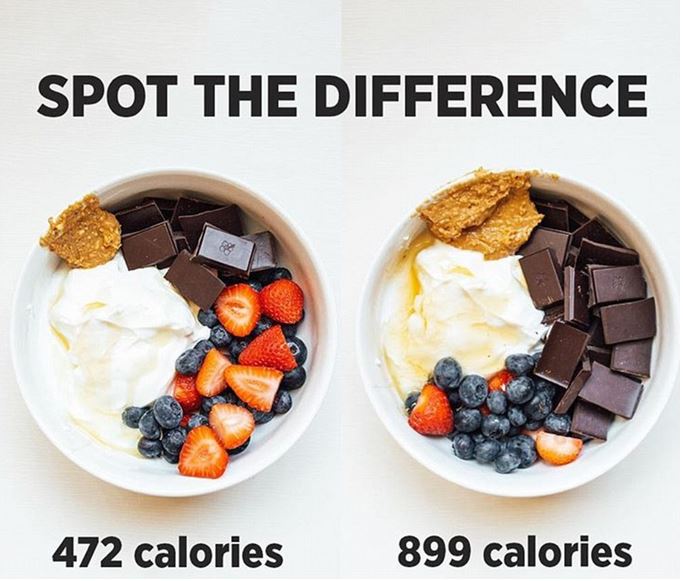 This snack of yoghurt, dark chocolate, cashew nut butter and berries doubles in calories when you add an extra 40g of chocolate and 2 more tablespoons of nut butter.

Back to Paula for this next double calorie example: 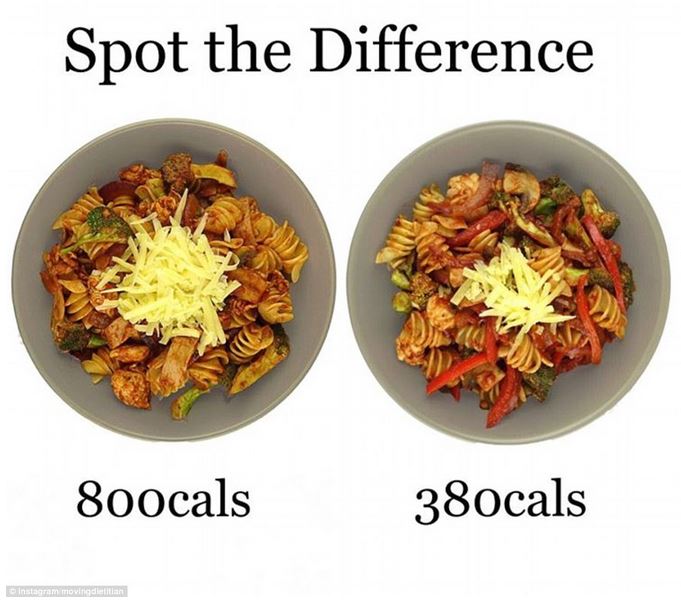 An extra cup of pasta is a big factor in adding more than 400 extra calories.

Right: 100g chicken which has been poached instead of fried, 1 cup of cooked pasta, 1 teaspoon of capers, 10g of low fat cheddar, 1/4 of a large pepper, 4 large florets broccoli and 2 medium mushrooms.

Amanda uses tricks like replacing sweet potatoes or past with noodles made from vegetables.  in this example changing from sweet potato noodles to zucchini noodles and removing the olives has cut the calories by 80%. 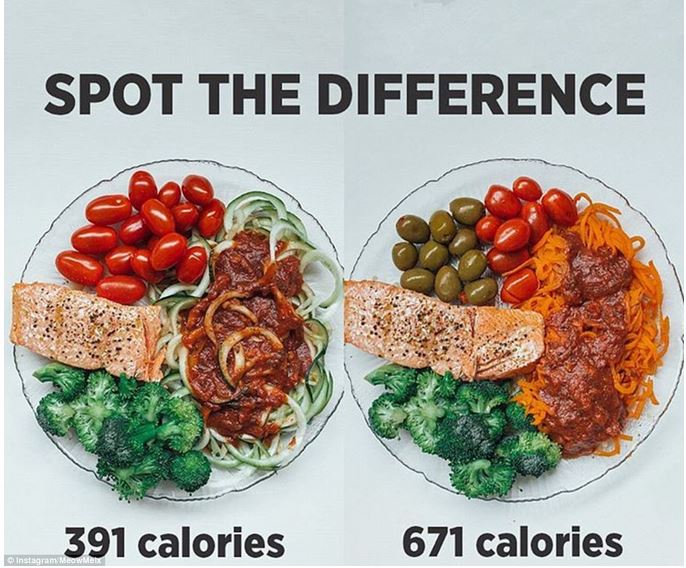 So making wise substitutions,  adding more vegetables instead of some of the higher calorie elements of a plate will give you meals which look very similar but can come in at half the calories. This can be a huge step forward to making your weight loss dreams a reality.

http://www.weightodiet.com brings you the latest dieting science and tips to help you on your weight loss journey. We sort the fact from the fiction and find the top diet plans to help you achieve the body you want.