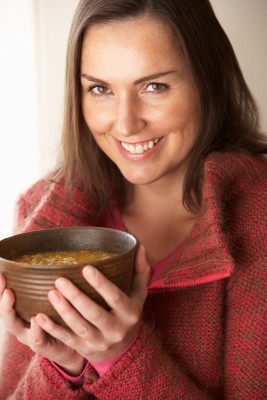 When people are forced to eat a smaller lunch it's been found that they don't compensate by eating more at other meals. This can lead to weight loss.

Researchers in the Division of Nutritional Science at Cornell University offered half their 17 volunteers a buffet lunch and the other half were given a choice of one of six, commercially available, portion controlled foods instead of the buffet. All the volunteers were allowed to eat whatever they liked for all the rest of the day's meals and snacks.

“The results confirm that humans do not regulate energy intake with any precision,” said Professor David Levitsky, “Over a year, such a regimen would result in losing at least 25 pounds (11kg).”

“Roughly two-thirds of the American adult population are overweight or obese. On average, American adults gain weight at a rate of one pound per year” said study's co-author Carly Pacanowski,  “making small reductions in energy intake to compensate for the increasing number of calories available in our food environment may help prevent further weight gain, and one way of doing this could be to consume portion-controlled lunches a few times a week.”

The study suggests that both high-protein and high-fiber meal replacements could result in weight loss simply by providing fewer calories. However, as fiber makes us feel full straight away and protein helps us to feel full longer they probably play a dual role in helping us feel satisfied and not in need of an afternoon snack.

If you don't have time to create your own lunches there are many excellent meal replacement drinks, shakes and portion controlled foods available.

David A. Levitsky, Carly Pacanowski. Losing weight without dieting. Use of commercial foods as meal replacements for lunch produces an extended energy deficit. published in the journal Appetite, Oct 2011.