The weigh in this morning was another disappointing one for me. I weighed exactly the same as I did yesterday. Fortunately my partner in this slimming venture had lost 2 pounds. Clearly something is working.

Breakfast was swiss baked eggs with cream and cheese. Yum, but very “fattening” 🙂

Lunch was an avocado and prawn cocktail with lettuce and marie-rose sauce,  made with tomato puree instead of tomato ketchup. Not quite as nice as the proper version but quite adequate.

This was actually the last day of the high fat phase,  But it was also the first day that I decided to weigh all my ingredients and work out exactly how much I'd eaten.

I left the calculating until the evening – having a full time job I didn't have time to do it as I went along – but I was pretty confident that I'd met the nutritional parameters in terms  of calories, and % fat.

After dinner I entered everything into a spreadsheet and after a little Google research.  I was quite horrified to discover that I’d eaten one third more calories than allowed, and missed the % fat by 7 percent!

It's no wonder I hadn't lost more weight on this phase, and a big lesson for next time.  Plan the meals and count the calories in advance!

I think my downfall here was assuming the avocados were high fat.  They do contain lots of very healthy mono-saturated fats and are incredibly good for the skin, but the overall calorie composition isn't right for this phase of the diet.

After the lesson and slight queasiness of the last 3 days I was pleased to move into the final phase which is more of a consolidation.  The nutritional balance isn't as critical in this stage and fewer foods are forbidden.

I wasn't expecting to lose as much weight, but also I didn't feel as hungry and so the peppermint capsules were not required to stop the night time hunger pangs.

The weight loss was slower and steadier which was not as motivating when the scales move pretty much every day, but it was clear that I was on the downward trend – albeit much more slowly.  This was a diet regime which I felt was more sustainable.  The good thing about the first phases is that the end was always in sight as each phase looked to be slightly less restrictive than the last and the phases only lasted around 3 days.  This phase lasted over a week, so it was good to be feeling a little more “normal”.

By the weigh in on the final day I was really looking forward to celebrating.  My friends had noticed the difference.  My belt was 3 notches inside where it was three weeks ago and some of my clothes were hanging off me. 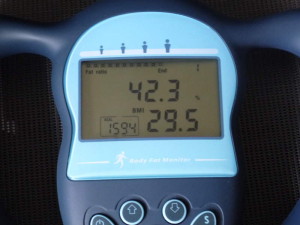 In all I've lost 14 and a half pounds.  Not the 20 that Brian Flatt claims is possible, but I suspect if I'd actually done the recommended exercise and hadn't cheated so much, I would have probably lost a few more pounds.

I've lost 2.5% of my body fat which is good news.  I would have liked to lose more, but I'll take that as a start. Importantly for my doctor, my BMI is now in the overweight not the obese category which could also help me save on health insurance!

The small cheats I did made the 3 weeks much more tolerable for me. Coffee in the morning for example – it was just too hard to work with the headache of caffeine withdrawal as well as feeling hungry.

The diet was hard work but the really hard part was at the beginning where the motivation was greatest – and the results were in themselves very motivating.  By the end I almost felt I could just carry on with it – and I think that's Brian Flatt's point.  After a while everything becomes a habit and it's not so much effort to keep doing what works.

Does the 3 week diet work?  There is no question that it works. And with the passage of time the hunger pangs of the first few days have become a distant memory.  I've shown myself that I can easily manage to diet for a short time, whereas if I had to carry on denying myself for months, then I would simply be doomed to failure.

Would I recommend the 3 week diet?  Yes I would.

Now I'm off to get my thin clothes back out of the wardrobe – and perhaps buy some new pants!

If you want to try the 3 week diet for yourself, you can get it here or for more detailed info about the program, click here

3 Week Diet Before and After

I had taken before and after measurements round my waist and thighs, My waist was nearly 2 inches (4cm) smaller and my thighs had lost an inch each.

< Back to the Previous Days

As a hypnotherapist and former personal trainer, I've been helping people lose weight for a long time. Read more...