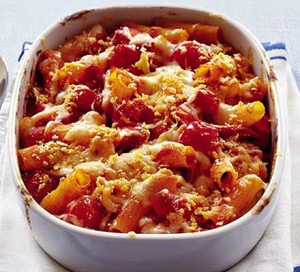 Scientists have recently discovered that reheated pasta may be less fattening than freshly cooked pasta.

Normally, when pasta is digested, it causes a rise in blood glucose and an insulin spike.  The spike in insulin causes fat to be stored in the body.   This is the reason why pasta is forbidden on a low carb diet.

A series of experiments, funded by Diabetes UK and carried out for the BBC program “Trust Me I'm A Doctor”, showed that eating cooked, cooled and reheated pasta only causes 50% of the rise in blood sugar levels that eating freshly cooked pasta causes.

They concluded that cooling cooked pasta changes part of it's molecular structure into something called “resistant starch” which (like fibre)  is not able to be digested in the body and therefore doesn't cause the same rise in blood glucose.

This means that choosing reheated forms of pasta such as Lasagne or pasta bake changes a carb-loaded meal into a much healthier fibre based meal.