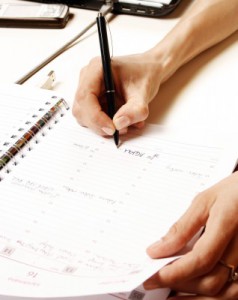 I wasn’t too surprised when I read this. When I wonder how I became so chubby, I usually conveniently overlook the fact I snack when I’m bored. And instead of eating just a couple of squares of chocolate, I would eat the whole bar. Writing down how much I’m eating also makes me realize how much I eat supposedly to stop something going to waste.

So keeping records will help you lose weight. It’s more effective still if you have someone you can show the diary to. The added pressure of being accountable usually makes this an even more effective strategy.

The keys to success

The key points to successful journaling are:

As well as paper based diaries, for the technologically inclined there are a number of apps available which will allow you to record everything you’ve eaten – some will even calculate all the calories and grams of carbohydrate for you. Many people find that knowing the statistics can be not just revealing, but motivating too.

The science of food diaries and weight loss

One of the largest weight loss studies was performed by researchers at the Kaiser Permanente Center for Health Research. The 1700 participants in the study were asked to follow a diet high in fruit and vegetables and low in fat. They were also asked to exercise at moderate intensity for 30 minutes a day. After 6 months the average weight loss was 13 pounds and 69% of participants had lost over 9 pounds. Participants who had kept food diaries had lost approximately twice as much weight as those who didn’t record what they ate.

In 2012, Anne McTiernan and her colleagues at the Fred Hutchinson Cancer Research Center studied 123 overweight post-menopausal women. They found that although the average weight loss over a year was 19 pounds, those who had kept a food diary lost on average 6 pounds more than those who didn’t. As Dr McTiernan said “A food journal is one of the easiest ways to keep track of what you are eating. If you write it down, it seems more real. If you don't, it's so easy to pretend to yourself that you didn't eat that much”.

Reference: Published in Journal of the Academy of Nutrition and Dietetics,September 2012 – view summary

Forty two people took part in a study by Diane Helsel of the University of Pittsburgh. She divided them into two groups. The first group were asked to do detailed food diaries, the second to do abbreviated diaries simply recording the size of the meals (S, M, L, XL). There was no significant difference in the amount of weight lost between the 2 groups. However, weight loss was associated with the length of time for which the diaries were completed. This indicates that it’s the process of journaling which promotes weight loss and the detail recorded is less important.

Reference: Published in Journal of the American Dietetic Association October 2007